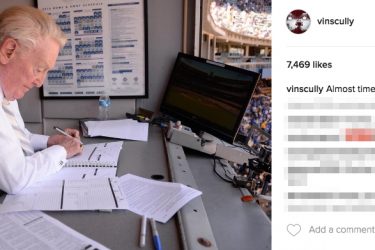 Vin Scully’s wife Sandi Scully listened to Mr. Scully sing a song to the crowd on his last night as a broadcaster. He does indeed have a memorable voice. It may be the most recognizable voice in baseball. Sandi loves him deeply too. She was emotional when he talked about his farewell to the fans, and she had her arm around him when he sang to them. It was a very sweet gesture indeed.

Vin married Sandi in 1973. He decided to marry her only a year after his first wife, Joan, died of a medical overdose. It was a tough time. Vin Scully’s wife Sandi supports him emotionally. She sure had her job cut out for her when his oldest son died in a helicopter crash. It’s certainly something that needs to be mentioned when you talk about his personal life. He was inspecting oil pipelines after an earthquake, and the vehicle crashed. It seems like a very rare thing to happen. So he admitted that it still haunts him. Losing your first son is not something you “get over,” but he came to a kind of peace about it. It upset Sandi a great deal as well.

Sandi loves Vin’s voice. She told The New York Times, “His voice is beautiful. Vin would be Gene Kelly if he could be anybody reincarnated.” I agree with her. That’s why they hired him to be the voice of the Dodgers. That’s why he remained the voice of the Dodgers. Sandi gave birth to plenty of his kids over the years. She can say she is a great grandmother as well! The same is true for Vin. If you ask her, Sandi will talk about her favorite baseball memories with Vin. It is no wonder they don’t go to a lot of baseball games as spectators. She used to attend big games in the broadcasting box when she wanted to. Vin Scully’s wife is proud of her legendary broadcaster.