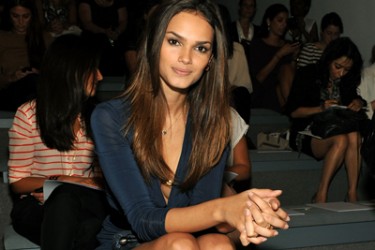 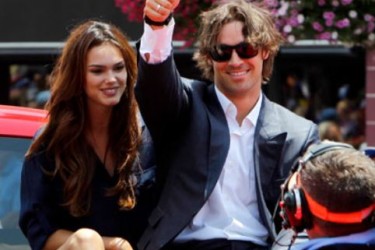 Despite middling results in 2013 on the diamond, things off the field are going spectacularly. CJ Wilson proposed to Lisalla recently, who happily shared the news on Twitter:

@Lisalla: I literally can’t have imagined a more perfect proposal. So excited to marry @str8edgeracer !! #Engaged

Congratulations to the new couple.

Coming off back to back loses in the World Series, CJ Wilson was probably feeling pretty down. But man, have things turned around for him. First, he signed a 5 year contract with the Angels worth $77.5 million. Living up to his large deal, he has posted a sub 3 ERA and was named to the AL All Star team. And now reports are out that CJ Wilson is dating Lisalla Montenegro, who also happens to be a smoking hot Brazilian model.

Wilson and Montenegro have been dating since January, when they met in Los Angeles. Montenegro (who is 24) actually lives in New York City and presumably was out in LA for a modeling gig. She has been modeling since 15 and signed on with Maybelline in 2010.

Wilson also had to work a while before he got where he is today. Initially brought up in the Rangers farm system as a starter, he was converter to relief shortly after being called up to the majors. It wasn’t until 2010 when Texas decided to give him another shot at a starting role. Now 31, he is considered one of the best left-handed pitchers in the game.

Wilson is admittedly quirky as well. The straight edge pitcher reportedly likes sword fighting, can fly a plane and is big into reading. On his way out of Texas, he attempted to prank his former battery mate Mike Napoli by tweeting his phone number (which absolutely did NOT go over well with Napoli). These are all things Montenegro will have to get used to if they are to make their long distance relationship work. One thing going for her is that Wilson reportedly loves her accent; but then again, who wouldn’t?

Wilson appears to have a type, as you’ll remember that he used to date another model, Dominique Piek. 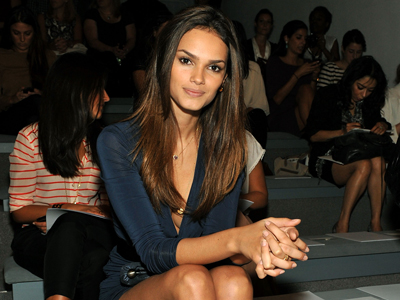