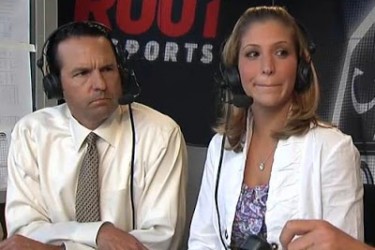 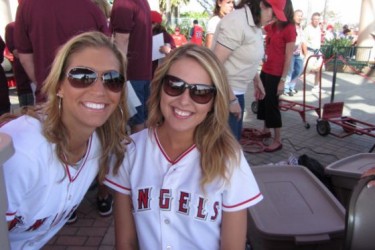 Chris Iannetta’s wife Lisa Iannetta bailed on teaching little monsters the ABC’s. I can’t say I blame any elementary school teacher for quitting when they get hitched. Did you ever see “Kindergarten Cop”? That’s how well I would fare as a teacher, except I’d be less tense because I wouldn’t have to worry about finding that weird bad guy with the long ponytail.

As the wife of Chris Iannetta, Lisa has done her part with the Angels outreach programs and charities. She recently attended the Angels’ charity event benefiting Special Olympics and helped raise 29,000 bucks. It was reported that Chris signed four dozen balls for the charity event, and that was apparently the most of any Angels player. Hey, that’s what happens when you get really competitive people together– they compete to out-sign baseballs with sharpies. Apparently there is some kind of grab-bag involved in the charity, and Lisa got to be the girl who orchestrates it. This apparently is quite the honor, and only the hottest wives get the chance to be the official grab-bag girl. Nice work being hot, Lisa! It sure beats teaching kids how to write cursive.

The two have a daughter named Ashlynn whose about a year or two old. I am guessing that by the time Ashlynn starts third grade, she’ll be thanking her lucky stars that her mom didn’t keep her day job. Nobody likes to have to be taught by their own mom. Chris’s wife Lisa has thus far been a good housewife and mother for the little one, teaching her the basics of baseball and occasionally taking her to games. There’s only so much you can teach a two-year old about competitive sports before you begin to really try their patience. They don’t call it the terrible two’s for nothing, and this is right about the time Ashlynn starts to learn the word “no,” as in “no more baseball tutuorials and in-depth analysis, mom.” 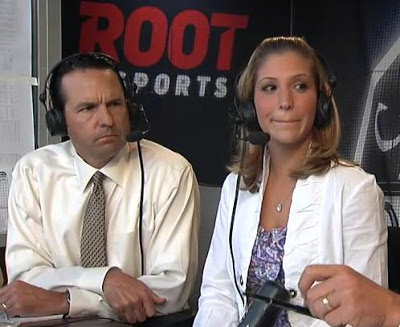