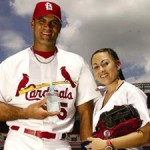 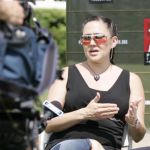 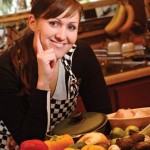 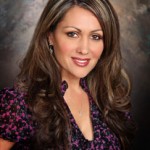 After nearly three years out from the somewhat nasty split with the Cardinals wen Albert fled to the West Coast, and a full season removed from the disaster that was the 2013 campaign, life is good. Albert is back to his slugging ways, and the Angels are locking down the best record in the American League. Oh and by the way – it’s year three of a 10 year, $240 Million dollar deal.

Albert Pujols’ wife Deidre Pujols continues to be involved in the Pujols Family Foundation. In addition to promoting awareness of Down syndrome, the charity helps provide medical care and supplies to the poor in the Dominican Republic. In addition to making several trips with doctors and dentists to the DR, the Pujols’ hold an annual golf tournament to raise money for the fund.

12/12/2011: Shots fired! Shots fired!
Albert Pujols’ wife Deidre Pujols has had enough spin from the Cardinals camp. In a radio interview with Joy FM in St. Louis on Monday, Deidre Pujols let the listening public know the truth. “The city of St. Louis has been deceived,” During a wide ranging, 40 minute interview, Deidre expressed frustration and confusion over some of the stories to come out in the last week. She let it be known that while the Cardinals publicly announced their intention for Pujols to be a Cardinal for life, they only offered a 5 year deal. In an equally interesting note, she explained their decision to head to Anaheim was not strictly based on money, considering they turned down a larger contract.
It’s doubtful that the traditionally classy Cardinals organization will respond to these comments, but still adds another interesting wrinkle to an already fascinating Hot Stove story.

Albert Pujols and his wife Deidre Pujols were married on January 1, 2000. The two met shortly before the turn of the century at a Salsa club in Kansas City. The pair has three children; Isabella, Albert Jr., and Sophia. Isabella is Deidre’s from a previous relationship, who Albert has subsequently adopted.

What’s this? A post where we’re not snarky?
No, it’s true. We can’t find a joke here. Probably the best player in baseball is also probably the best person in baseball. The couple’s oldest daughter, Isabella, has Down syndrome. Because of the dedication to their child and the cause, the Pujols’ are extremely active in the community. The Pujols Family Foundation offers assistance to families of children with down syndrome. Albert and Deidre also annually host “Buddy Walk in the Park” where he has local families with children with Down syndrome to Busch Stadium as his guest.

Albert Pujols’ wife Deidre Pujols, in addition to being a stand up person in the community, a devoted mother, a dedicated wife, and an activist for a worthwhile cause, knows her shit about baseball.

Albert was going through a rare slump in early 2007. After pouring over hours of video, Albert and hitting coach Hal McRae couldn’t diagnose a mechanical cause to his drought at the plate. One day, on his way to the park, Albert received a text message from his wife which explained that she thought his hands had fallen too low and his crouch at the plate too pronounced.

Pujols got to the park and compared video only to learn that Deidre was 100% correct. That night, Pujols snapped out of his slump in a big way, going 4-for-4 with two home runs.

Further evidence that the woman is always right. 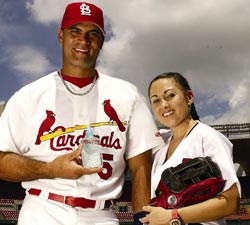