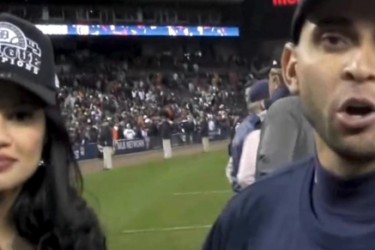 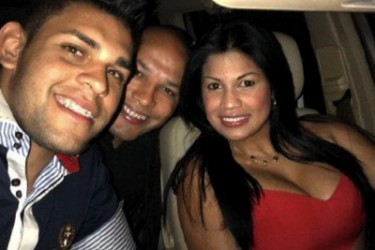 Omar Infante’s wife Yohanna Infante believes that home is where the heart is. The two native Venezuelans live in Lecheria on the northeast coast of their country. Man, there is a lot of Venezuelan baseball talent in the Majors. The Giants and the Royals are no stranger to that talent either. After last night, Kansas City is really appreciating it more than they ever have. Omar busted the tie and broke the game open.

Omar and wife Yohanna have a son. His name is, presumably, a combination of their names: Yomar. That’s a pretty slick move. I wish more couples would do that. Angela and Buck Showalter would have had a kid named Buckula Showalter. That would’ve been the cat’s meow. Yohanna is plenty happy with the huge pay-bumps Omar has taken over the past six years. Compare his Atlanta contract in 2008 of $4.3 million to his four-year 30-plus million deal and we’re talking about a lot of financial security. They might be able to buy a few towns in Venezuela after he retires. The couple has been married for over ten years, and they’ve seen their ups and downs as far as Omar’s career goes. Remember back in 2010 when people were trashing Infante as an all-star selection because they felt he didn’t have the stats, and Omar agreed with them! Then there was the game back in April where he got nailed in the face by a fastball from Heath Bell, who clearly did not want that to happen. You can only imagine how Yohanna felt when she saw that happen. The worst part was the broadcasters saying “Oh you never want to see that happen” and then replaying it in super slow motion multiple times and zoomed in. I guess that’s modern baseball, folks. Yohanna is attending all the home games and wearing her cap, hoping the Royals will pull it off.