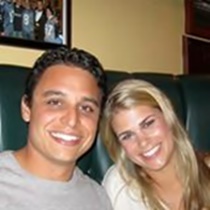 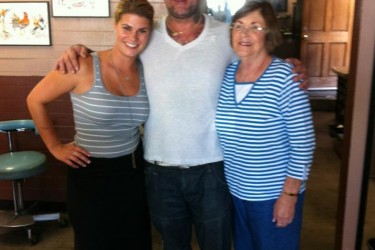 Jason Vargas’ wife Shelley Vargas is another case of Major League Baseball’s endearing high school sweetheart syndrome. Of all the big sports (baseball, basketball, football, hockey, and even golf) I am now quite confident that baseball has the most dudes married to their high school sweethearts. And what a sweet heart she has, that Shelley.

Jason’s wife Shelley is a Cali girl, born in Lake Forest. The couple upped and moved to sunny and scorching Phoenix, Arizona only last year after Jason signed to the Royals. She’s totally thrilled what they’ve done so far too. You can only imagine how happy Jason is even though he came from a red hot Angels team. Shelley and Jason have three kids, one of them, Lucas, is under a year old. The other two, Joshua and Elizabeth, are 3 and 5 respectively.

Shelley is busy with the kids. That’s how it works when you load up on chillins’. She spends most of her time caring for them at home in Phoenix, and they do attend spring training games that Kansas City plays there. That was sort of the point of moving there, as they saw it. Of all the times to move from one city to another, you’d think they caught the best time for the kids. They’re too young to be that affected by moving from one place to another, and it’s a good deal for everybody if they’re in Phoenix now. Real estate is pretty darn cheap out there. Jason has racked up over 24 million bucks in his career, so Shelley can’t say that he’s not a provider. He’s also said that he’s light on hobbies and spends most of his free time helping Shelley care for the three kids. Thatta’ boy, Jason. Get in there and change some diapers. Those kids don’t care how well you pitch against the Giants.