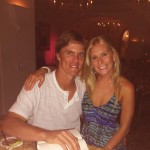 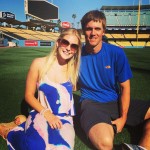 Zack Greinke’s wife Emily Greinke is the mother of their kids, Bode and Griffin. She gave birth to Bode in July of 2015, with Griffin arriving a couple years later in June of 2017. Since then, Emily fully immersed herself in the mother role. She also refers to the family cat as their sister.  So, she has her hands full!

As you can imagine, everyone in the family chipped in to their most memorable year ever.  AZ Central runs down the list better than we could.

Greinke also posted the best ERA in baseball this past season, en route to a second-place finish for the NL Cy Young award.

Oh, and Greinke signed a six year, $206.5 million contract with the Arizona Diamondbacks on Friday.

Not a bad way to turn 32.  The Greinke’s are fully into this human and feline parenting this.  Zack Greinke’s wife dressed up Bode as a cat for Halloween and dressed the cat up as a baby.   Zack shows up in plenty of Emily’s pictures with their cat too.  Emily’s official statement is “yes, I love cats and no I’m not crazy” when it comes to this.

Before all the baseball fame

Zack Greinke’s wife attended the same high school as Emily and met her back then. She worked as a library assistant, and Zack came in there to do his homework. Eventually, Emily became Miss Daytona Beach in 2008. It’s a nice notch on her belt. Zack suffers from a social anxiety disorder, and Emily helped him immeasurably. He wanted to quit baseball, but Emily convinced him to keep playing.

Zack Greinke’s wife appeared on shows such as Larry King Live, The View, and The Today Show. She used to be a cheerleader on the Dallas Cowboys squad. The lady is a star! She even showed up in a movie called “Sydney White.” The camera loves her. In January of 2017, she shared an old Dallas Cowboys calendar picture, but Emily still hasn’t lost her fastball today!  In March of 2015, the Greinke’s had a gender reveal party by opening a box of blue balloons.  Emily loves their pro baseball life, and takes time to post on social media what the family is into.  The family is used to moving around a bit from Kansas City to Milwaukee (who else forgot his stint there?), to Los Angeles (both the Angels and Dodgers), to Arizona and finally Houston.  Hopefully for their sake this is their final landing spot once and for all!