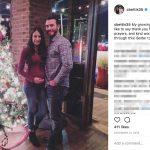 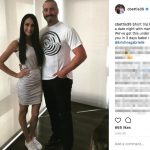 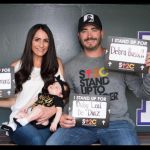 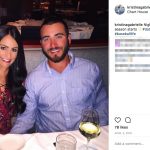 Chad Bettis’ wife Kristina Bettis is the mother of their young daughter, Everleigh. They welcomed her into the world on March 29, 2017. Chad then immediately began cancer treatment. You could say it was an eventful spring for them. In fact, Kristina posted a picture of Everleigh after one month. She placed a sign next to the child that said “my daddy is a warrior”. I found it quite touching. Chad started the chemotherapy only five days after Everleigh arrived. Actually, he battled the cancer before that. The doctors told him in December he beat it. Then, he engaged in the fight once more.

Now, apparently he did beat it! Guess who’s happy about that? Chad Bettis’ wife! That’s who! Since he feels better and is in regular rotation now, people look up to Chad. I also find it a pretty inspiring story. There’s a picture Kristina shared where they hold names of people who stood up to cancer. One of the names Kristina holds says “my husband,” and it’s pretty sweet. They represent a charity called Stand Up To Cancer. Katie Couric also founded it. Anyway, the couple do their part to support the organization.

The family also own a dog named Cy, and I believe he is a brown Labrador. They do goofy stuff like dress him in a baseball uniform for occasional photo opportunities. During spring training, the family travels to Arizona and enjoys hiking. They married in November of 2015 and honeymooned in St. Lucia. Fantastic choice, guys, because it looks mesmerizing. Honestly, is there a Caribbean island that isn’t? A year later Chad battled cancer, twice, and won! Chad Bettis’ wife mentioned to Bleacher Report what he told her. He said she’d get through it. She said she felt glad they didn’t wait to treat it. Kristina also said he handled the whole process with poise because he always smiled. A lovely family!