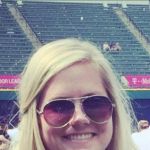 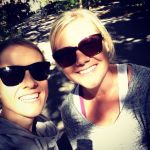 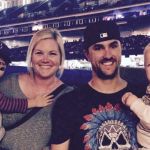 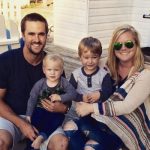 Lonnie Chisenhall’s wife Meredith Chisenhall is the mother of their two young boys. In late September, Meredith partied at a hotel with their family friends. However, all of their friends had kids sleeping in the rooms. So they partied in the hotel hallway. I’ve never seen that before, but I’m pretty sure I’d be mad at them if I was a sleeping guest. You only live once, though, so check off hotel hallway partying while you can!

You can bet this family of four travels to the baseball field often. Meredith posted a picture of them together at Progressive Field, standing on the grass by the Indians logo. Lonnie Chisenhall’s wife looks exactly like all of the Indians’ wives. In a recent player wife group picture, they all posed together with their young children. Baseball players are so predictable. Step one, find a young woman, step two have a family by age 30. It’s a good thing! They’re populating America with genetically strong and athletic babies! As a note: Meredith said she will move out of the country if Kanye West runs for president in the future. I will join her.

I liked one of the posts Lonnie Chisenhall’s wife put up on social media about her youngest kid. She showed a picture of him in a shopping cart dressed in a head-to-toe Captain America costume, and it was not Halloween. He was in the shopping cart with a box covering him. So he essentially looked like a tiny Captain America trapped in a cage. It’s a pretty funny image, especially when she talks about how she gets weird looks from other people. In 2015, both Lonnie and Meredith declined to dress up on actual Halloween, but they dressed their kids as Spider-Man and Batman, respectively. Kids loves super-heroes. You can excuse Lonnie for not wearing a costume. He’s got to dress up like a baseball player, like, every day. 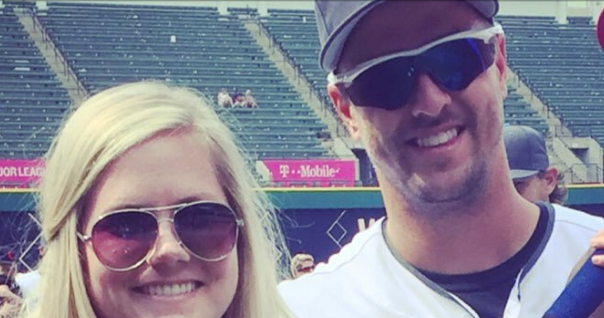