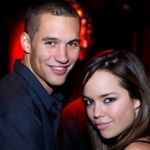 UPDATE: 01/11/2012: Word from various news outlets says that Grady Sizemore and Brittany Binger are now engaged and are planning to wed this summer. If I’m the Indians I’ve got to be annoyed that Grady already has an injury planned, or if he scheduled it during the All-Star Break, that he knows he won’t be an All-Star. Seriously dude, you have a 6 month offseason where your job is to work out. Couldn’t the wedding have been planned for then?

Brittany is a 23 year old model who is best known for her former Playboy Playmate of the Month title in June, 2007.
The two began dating in December, 2008, and were together when the infamous Teacup Dong photo scandal broke (there is no confirmation if the two are still together).

Alright, so here’s where shit gets interesting.
Grady sent the dong shots to Brittany via email. That much has been known for some time.
What hasn’t been known is why the current non-jilted girlfriend would leak these pics.
Enter 19 year old Leah M. Ayers. According to the Minneapolis Star Tribune, Ayers was charged Tuesday, November 9 with breaking into Brittany’s email, stealing the infamous pictures, and then sending them around the internet. Ayers is alleged to have hacked Brittany’s password to obtain the photos. When originally confronted by authorities investigating the case, Ayers told cops that her computer was being worked on the repair a broken fan. Authorities later learned that her laptop was infact in the shop, but for a hard drive formatting, and no fan repair. Forensic analysis was conducted and apparently confirmed that Ayers computer was used to hack Brittany’s email and distribute the photos.