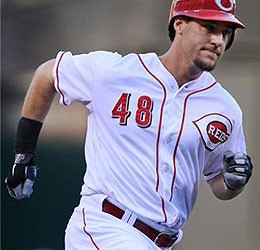 For as consistent of a player that Ryan Ludwick is, he sure seems to switch team often. Just taking a guess here, but I’m sure that has to be pretty annoying. Apparently not if you’re Ryan Ludwick’s wife Joanie, as it seems like she relishes the task of finding new apartments.

Ludwick started his career in 2002 with Texas, before getting moved to Cleveland in 2003. After settling in with St. Louis, he started getting regular playing time in 2007 and blew up the next year with 37 bombs. Despite his emergence as every day player, he was traded two years later to San Diego in a 2010 deadline deal. I hope he didn’t blink, because the very next trade deadline, San Diego shipped him back across the country to Pittsburgh. He didn’t stick there, so Ludwick signed a one year deal with Cincinnati. Judging by his stats this year, there’s hope he might may not have to pack and leave… at least not right away.

Ludwick first met his wife in 4th grade. But this isn’t a story about childhood sweethearts. Both Ryan and Joanie continued on with their respective life’s until their paths crossed again after college. They were married in 2003 and built a home in Texas. They have one son, Stetson, who was born in 2008. 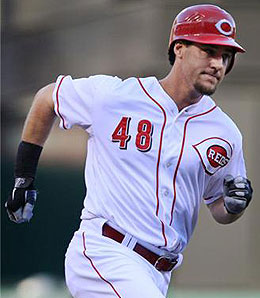