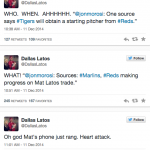 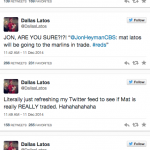 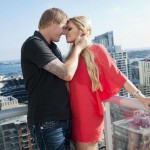 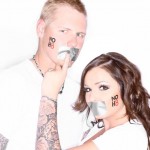 As Mat Latos was being dealt from Cincinnati to Miami during the 2014 Winter Meetings, Dallas Latos took to Twitter to express the anxiety that go into trade rumors. Some highlights included

Oh god Mat’s phone just rang. Heart Attack.
…
Listen, the last time Mat was traded we found out on SportsCenter. You guys might know before I do.
…
Literally just refreezing my Twitter feed to see if Mat is really REALLY traded. Hahahahahahaha

When Mat was ultimately dealt to the Marlins, Dallas expressed appreciation for it all being over, and wanted to clear the air.

You guys… I am not mad about going to Miami. I am not complaining. These things are just surreal. Especially when it all unfolds on Twitter.

Enjoy Miami – Hopefully trade chatter dies down for a while, Dallas!

Often times when we’re doing research, information on an athlete’s girlfriend or wife is limited to their name and maybe when they were married. Other times, like with Mat Latos’ wife Dallas, we’re blessed with a what’s what straight from the source.

Mat and Dallas were set up through a mutual friend. Dallas, as is abundantly clear from her blog, is an independent woman. This almost cost her a chance with Mat. However, similar to a pitcher grinding out a complete game, Mat kept asking their friend about Dallas despite her initial distance due to him being a baseball player (and her wanting to stay in the single life). After finally lamenting to a movie date following the 2009 season, Dallas knew almost immediately she had made the right decision.

Mat and Dallas became engaged in July 2010 and, on a whim, were married a few months later in October at the courthouse in her hometown. Initially meaning to keep it a secret, Mat accidently spilled the beans during an interview. On their one-year anniversary, both got matching tattoos that say “The only thing that matters at the end of the day is you and I.” Judging by their respective pictures, they are both big fans of ink.

As stated earlier, Dallas has been somewhat of an open book when it comes to her and Mat. She has a blog on MLB.com and also connects with fans using Twitter. Unfortunately the dark side of online messaging reared its ugly head earlier this year, forcing Dallas to take a short break from Twitter. And this is why we can’t have nice things, people. That wasn’t the only time she has been in the news though, also sparking a controversy retweeting a video of Jose Valverde’s alleged spitball, enlightening us on the supposed shadiness of autograph seekers and even creating a Reds drinking game. Personally, we can’t wait to see what’s next. 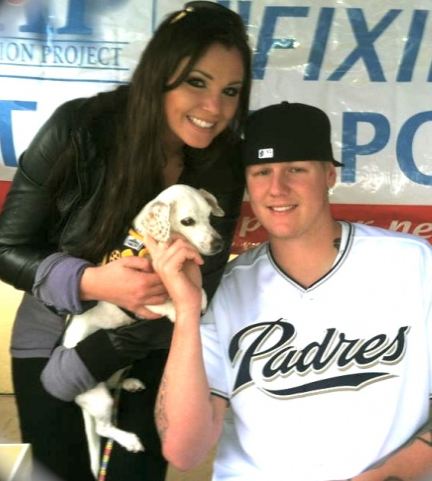