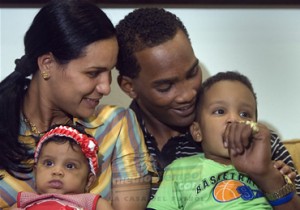 We’re not allowed to trade with you, Cuba, but we will take any baseball player you’d like to give us. That’s our stance on the wonderful wellspring of baseball talent known as Cuba. Alexei Ramirez’s wife Mildred Ramirez is happy he’s here and doing well for the White Sox. The two have two kids and are loving life. A few years ago, though, she joined her husband in being not so happy about some comments Alexei’s old manager uttered about the dictator Alexei fleed from.

That former manager is Ozzie Guillen. We all know Mr. Guillen as someone who occasionally flies off the handle and says dumb stuff to reporters. He’s had a few controversies centered around the gay and lesbian community and Asians, but none so big as the cauldron of bad vibes he brewed up in Miami just five games into his job. In April of 2012, he told a reporter that he admired Fidel Castro. He’s the manager of the Florida Marlins! He just poisoned the well of good feelings from pretty much the entire Cuban community in Miami, and guess what– it’s a very large community– and most of them don’t admire Fidel Castro. The same is true of Alexei Ramirez. Though Ozzie was his manager for some time and even gave him the nickname the “Cuban Missile,” Alexei was fairly perturbed by Guillen’s comments. He handled it with class, pretty much just saying he was entitled to his opinion but that he didn’t share the same feelings, and that an apology would be a good way to start for making up for his comments.

Well, it’s 2014 now, and Ozzie Guillen is no longer a manager. He was let go of by the Marlins despite having had something like three years left on his contract. Gee, they seemed to have changed their opinion of him. Alexei, on the other hand, is an all-star now. He’s proven himself to be an excellent fielder and good asset to the Chi-Sox. He’s had a bit of a rough time since the start of June, hitting in the low .200’s since June 1, but he’s still ready to roll.