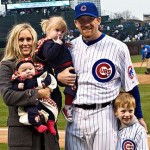 Ryan Dempster is a very polarizing player. In the fantasy world, we’ve found you either love him, drafting him year after year, or you don’t even consider him an option. I place myself firmly in the “ignore” camp, but was genuinely excited when my team (Atlanta) almost traded for him at the 2012 trading deadline. That said, as Red Sox fans on this site, I think we can all agree we’re less than thrilled about the fact that the Sox signed Dempster. While dominant with the Cubs in 2011, his quick stint in Texas showed us that Ryan isn’t cut out to pitch 1) in the American League and 2) in any park that is considered a hitter’s park. What is it about Dempster that makes him equal parts lovable and hateable?

Seems like a perfect question for Ryan Dempster’s wife Jenny Dempster who has likely seen both sides of it. But you better ask her quick, because the two filed for divorce in January, 2012. It seems that she has joined the ranks of many a fantasy player and is parting ways with her husband of 9 years. In a bit of foreshadowing perhaps, Dempster was quoted several years ago as saying, “My wife (Jenny) gets mad at me sometimes because I’m always cracking jokes, … Sometimes I don’t take things too seriously. But laughter is the best medicine. If you’re laughing, life is better.” This is a point I’ll side with him on as someone who’s always less than serious, but clearly it came as too much for Jenny. There are admittedly substantial rumors floating around that Dempster was caught in a situation a hell of a lot more serious than cracking one too many jokes that led to Jenny walking out.

Ryan and Jenny first met and began dating when she was working for the Atlanta Thrashers in marketing. They were married in 2003 and have three children – Brady, Riley and Finley. Their daughter Riley was born with DiGeorge syndrome and in order to raise money and awareness for the disease, the Dempster’s founded The Dempster Family Foundation. The foundation hosts an annual casino night and a ticket giveaway program called Dempster’s Dugout.