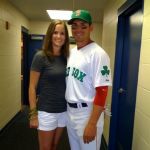 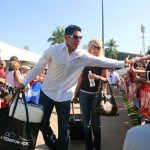 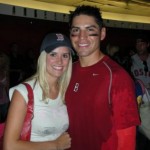 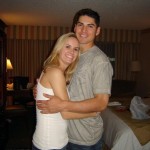 01/13/2013: Looks like our tipster was right, and we were tipped off to investigating further after we noticed a tweet from Jacoby Ellsbury’s wife Kelsey Ellsbury. The wedding took place in late December, and the local Boston media picked up on it after Kelsey posted a wedding picture to her Facebook page. The couple met approximately 6 years ago and have managed to keep details of their relationship, then engagement, and now wedding relatively quiet from the rabid Boston media – so if kids are forthcoming, we should probably know by the time they hit elementary school.

One final point – do not believe the wedding registry out there for a Jacoby Ellsbury/Kelsey Hawkins wedding on 1/1/2015. Appears to be a clever rouse for someone to get well-intentioned fans to send gifts to the a catfishing bride.

09/16/2012: PlayerWives.com has received a tip from an excellent source indicating that Jacoby Ellsbury is now engaged to Kelsey Hawkins. Details around the proposal and when it occurred are scarce, but our source has given us the heads up that Kelsey is walking around with a MASSIVE rock on her left hand. The couple have not set a wedding date, but we’ll keep you posted with anything new.

This is one of the first posts PlayerWives ever put up. In a moment of nostalgia, we thought it time to update things, to reflect a more complete picture than what we used to post which consisted of literally 9 words. We’ll take another crack at a profile…….

Jacoby Ellsbury has been dating Kelsey Hawkins since late 2006. The two met while attending Oregon State together, though didn’t begin dating until years later when Jacoby was in the minors, and Kelsey was working as a nanny in the Northeast. According to Jacoby’s mother in the Boston Globe, Jacoby’s never been a ladies man. He only had one girlfriend in high school and he’s now settled down with Kelsey Hawkins during a period of time in which he could run a tear through New England Pink Hatters on a record breaking legendary pace.
Now here’s where things get interesting. There have been rumors floating around New England for a couple summers that Jacoby and Kelsey have secretly wed. At one point, Kelsey changed her surname on Facebook from Hawkins to Ellsbury, but as of print on 11/9/2011, it’s back to Hawkins. At the most recent public appearance Hawkins made, there was no indication of a wedding or engagement ring. You decide.
At the launch of Jacoby’s charity wine in 2010, he was evasive at best when answering direct questions about his wedding, answering a question about whether there were wedding plans, saying only “We’ll keep that between Kelsey and me right now.”
Kelsey, who is a native of Pendelton, Oregon, has become a regular fixture at Red Sox charity events. She is a standard participant in the annual Red Sox Wives Fashion Show, and also ran a marathon with other Sox wives. The last time we researched her, she was working in the Edison School system, though we are unsure if she is still employed there as of November, 2011 re-posting. 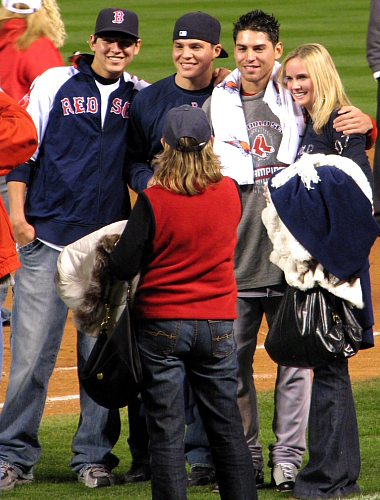