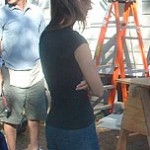 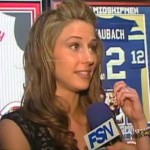 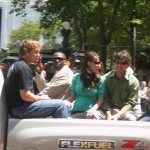 Ian Kinsler’s wife Tess Kinsler have been dating since high school together. While they did spend some time apart in college when Ian took the starting SS gig at Arizona State University, losing a job never turned out so well.

Lets head on back to college, then, folks!

When Ian lost the starting SS gig, he transferred to the University of Missouri. Why the hell would anyone choose to go from Arizona to Missouri?  Ian Kinsler’s wife may have had a hand in that.  One popular theory as to why he chose Missouri suggests that her chose the midwest because his future bride, and then current girlfriend Tess was enrolled in school there.

Things continued to work out.  We saw Ian Kinsler’s high school sweetheart become Ian Kinsler’s wife.  Ian and Tess Kinsler were married November 18, 2006.  Since the nuptials, kids have entered the scene. They one daughter, Rian Brooklynn Kinsler, born in December, 2008 and a son born June, 2011. Their son has the coolest name ever (especially for dudes who like their whiskey). Jack Jameson Kinsler. Badass name.

Seedlings holding down 2B

Many of you may know that Ian Kinsler has a business partnership with Jack White, of the White Stripes fame.  The pair have invested in a baseball bat company, Warstic.  So, dope whiskey name for the kids, and businesses with rock stars.  Can the Kinsler’s get any cooler?

And that’s not sarcasm.  Ian Kinsler’s wife has been a regular contributor to the charitable endeavors of his various teams.  The Wives & Girlfriends routinely work to benefit their local communities, and Tess Kinsler is no different.  But, while we often times see the wives of professional athletes involved in charitable endeavors (and Tess Kinsler is no different), we don’t always see children involved. In a very cool move, Ian and Tess Kinsler had Rian help serve the community on Thanksgiving. Whether teaching the meaning of charity or the intention of Thanksgiving is unclear – but no matter the reason, it’s still a nice sight to see.