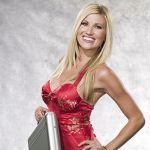 Clay Buchholz’s wife Lindsay Buchholz met him at a Donald Trump event. In fact, Trump personally introduced them. In case you were wondering if they support Trump, they do! Well, you don’t need common sense to be a baseball player, am I right? Clay and Lindsay have two girls and a boy on the way. After marrying in 2009, Lindsay gave birth to the first, Colbie, in August of 2010. Now, it’s all smooth sailing for the couple. Lindsay even helps out at the Clay Buchholz Foundation.

At one point, Clay Buchholz’s wife modeled one of those lucky suitcases on the show Deal or No Deal. Did she have to clean her fingerprints off the suitcase because of Howie Mandel’s fear of germs? I think it’s every American man’s dream to date a Deal or No Deal suitcase model and pitch in a professional baseball game. So Clay Buchholz is indeed lucky. For their other daughter, Coco, Lindsay recently posted a picture of her at her first day of Kindergarten. While Clay works the mound, Lindsay takes the kids to town. Formerly, Lindsay worked as a television travel guide, but I think she is just taking care of the kids now full-time.

So what do clay and Lindsay do for fun? They travel just like every other sports couple! They even went to a Willie Nelson concert. Lindsay went to the “Black Mass” movie premiere with one of her friends in 2015, and even though it was a completely forgettable and middling genre exercise, she still looked fabulous. One of the most exotic trips the couple made was to Uganda. Clay Buchholz’s wife went there with him to do some of that annoying white-savior-complex stuff. She appeared to fall in love with several village youngsters. Bless her heart! Last year, the couple even chilled with Roger Clemens at a bar in Austin, Texas. I see Roger Rocket in a bar, you know I’m gonna’ be arm-wrestling and chugging cold ones soon!