Zach Britton’s wife Courtney Leggett has to be praying for a trade to the Dodgers.

Oh, PlayerWives.com.  Why is that?

Well, folks.  You see, Zach Britton’s wife is a big time earner in her own right.  Courtney is lawyer practicing law in the greater Los Angeles area. She attended Southern Methodist University and finished up in 2011. By my calculations, she has had more than enough time to pass the bar and become a full-timer. And guess what? She is a full timer. After a quick search on the internet, you can find Courtney on LinkedIn officially listed as Mrs. Courtney Britton, Attorney at Law. That, my friends, is pretty great. How often do you see a player wife lawyer? Since she practices law in the greater Los Angeles area, which tells me Zach and Courtney don’t live in Baltimore full time. I can’t say I blame them.  But with rumors swirling that Zach may be on his way to the Dodgers, everyone would be happy.  Its kismet.

Zach himself throws one of the meanest sinkers in the game. He’s been able to maintain an awesome ERA and become one of the game’s fiercest closers prior to his injury in 2018.  The dude throwing a 53% whiff rate with his slider as well a few years back. All in all, Zach Britton’s wife Courtney has found herself a real gunner. Courtney had to be a very supportive girl during Zach’s slow climb through the minors on a quest to become dominant in triple A. It took him four years to become a full-time Major leaguer, but now that he’s developed, Courtney sort of doesn’t have to even keep being a lawyer, but I’m thinking she’s not likely to quit.

Lawyer you say.  Can Zach Britton’s wife sue you guys for your shitty website?

I’m curious what kind of litigation Courtney is practicing in and around LA. It’d be pretty awesome if she ended up working for Shawn Chapman Holley, who is Lindsay Lohan’s lawyer. Zach Britton’s wife could end up living a more interesting life than him! Although most lawyers have a long, arduous, brain-frying amount of boring paperwork to slog through, and the job itself is generally not very glamorous. Unless, of course, you happen to practice law around Hollywood. In that case, all bets are off. 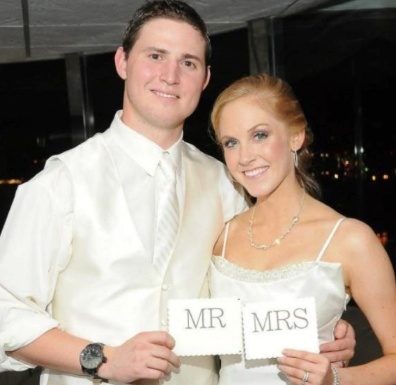