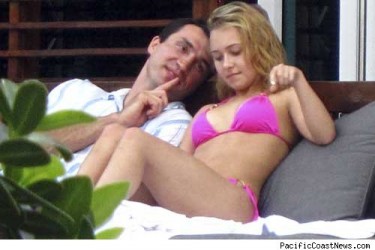 UPDATE: 12/20/2013: Sooo, a couple years ago, we mocked this relationship with beauty and the beast taking shape in Wladimir Klitschko and Hayden Panettiere. Apparently, they are way more mature than us, and looked beyond it, because we’ll quickly need to retitle this post Wladimir Klitschko’s wife Hayden Panettiere. It’s not known when the couple will tie the knot, but they’ve kept a pretty public profile, so we doubt it’ll go silent long. Keep it here!

UPDATE: 05/12/2011: According to People.com, Hayden and Wladimir have called it quits, citing the difficulties in maintaining a relationship across two continents. The breakup sounds amicable, as both parties had nothing but glowing reviews to say about the other through press statements.

In one of the most awkwardly photographed couples in the world, it appears that 9’14” boxer Wladimir Klitcschko’s girlfriend Hayden Panettiere, petite young hollywood starlet of tv show Heroes fame. According to multiple reports, the couple was spotted “canoodling” poolside in Miami on New Years Day, 2010. The villain from Rocky IV look alike Klitschko was first linked to Panettiere in February of 2009, just days after she split from her boyfriend and Heroes co-star Milo Ventimiglia, when the two were spotted with Panettiere sitting in Klitschko’s lap at Guy’s in Los Angeles. No confirmation from either camp on the validity of the rumors. 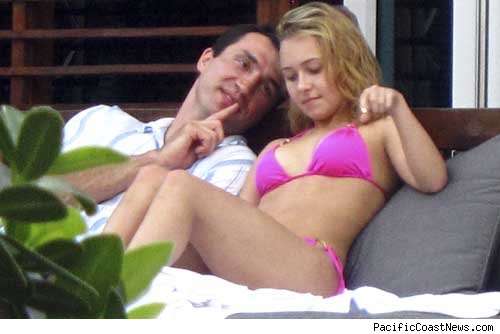