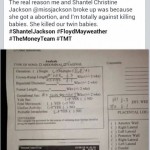 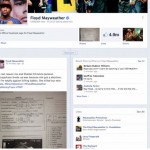 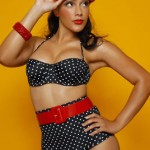 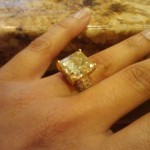 UPDATE 05/01/2014: With a huge fight scheduled for this weekend, that may be his retirement bout, one might think Floyd Mayweather had laser beam focus on the task at hand. After Floyd Mayweather’s girlfriend Shantel Jackson was taken to task publicly, it’s pretty clear he’s handling a lot in his life.

Floyd Mayweather took to Facebook to announce the following:

The real reason me and Shantel Christine Jackson @missjackson broke up was because she got a abortion and I’m total against killing babies. She killed our twin babies. #ShantelJackson #FloydMayweather #TheMoneyTeam #TMT

The post, seen to the right, included results from an ultrasound showing twins. TMZ is reporting that Miss Jackson is doing just fine and has moved on by dating Nelly, a close friend of Mayweather. Jackson took to Instagramin light of the post saying:

Well ….. with that type of behavior I guess you just gave up on owning that NBA team huh? Lol #childish #growup @NBA

She later went on Twitter to announce she’s doing fine: Head is up, and I’m off to the spa

With Floyd’s outspoken demeanor, you gotta imagine this gets worse before it gets better.

The post has since been removed, though no apology, or suggestion from The Money Team suggesting there was a hack or incorrectly posted item has come forward. We’ll keep an eye on this one, but for the next 48 hours, we imagine Floyd has bigger problems on his mind.

09-26-2011: Floyd Mayweather’s fiance Shantel Jackson has a tattoo of a heart for all 42 of his victories. The night of the fight, she penciled in a heart with a marker – we assume until she could find a tattoo parlor to update it for real. That’s a pretty awesome show of devotion but seriously, what would she do if they ever broke up? That’s an incredibly specific tattoo, even more so than a name. At least with a name, there is an outside chance she’d end up with another dude named Floyd. But the odds of ending up with another boxer with exactly 42 victories? Pretty slim. Check the photos to the right.


09-19-2011: Floyd Mayweather’s controversial victory over Victor Ortiz this weekend came as no surprise to his fiance Shantel Jackson. Mayweather’s girlfriend Shantel Jackson, in between playing dress-up and taking a dozen photos of herself during the fight, managed to find time to place a bet on her future husband. She even managed to pick the correct round! Check the photos.

Im sorry Miss Jackson… OOOOOHHHHHHHH. We can all see why Mayweather chose her. She is just killing it on every level and all aspects. This girl is so hot that I am contemplating fighting Mayweather for her. Winner gets the girl. Don’t believe me? Give me the number to Mayweather’s agent. BOOM GOES THE DYNAMITE!


Shantel was born in Miami where the heat is on… all night on the beach till the break of dawn. Her ethnicity is Black American, Caucasian, and American Indian. Personally I think she could use a little more Caucasian in her. ;) She is the typical model who claims she is into fashion. She has modeled ever since high school where she studied in entertainment and fashion. She was introduced to the world as Mayweather’s Fiancé when 50 Cent posted it on his twitter account. Here is what 50 had to say:

“Wow just got off the phone with Floyd, he’s getting married. He asked me to be his best man, I’m in shock… Shantel Jackson soon to be Ms Money Mayweather.”

Floyd Mayweather has a massive fight this weekend on PPV. He’s fighting Victor Ortiz and the fight should be epic. I do not think Ortiz can topple the boxing king…however Ortiz is probably the most dangerous fighter Mayweather has fought in a long time. Anything is possible. I honestly am hoping that Mayweather wins this time around only because I don’t want to spoil the chances of a Mayweather vs Pacquiao superfight happening. 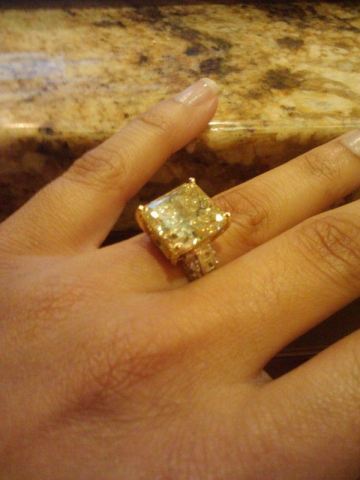